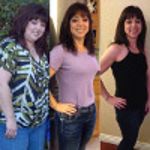 Tina decided a year ago to take charge of her own health with the help of a personal trainer and registered dietitian. A serious back issue had left her nearly immobilized, and while she had lost some pounds she was still not close to her preferred weight. She also suffered from a newly diagnosed medical condition.

With a new exercise regime and real-time feedback on her meals, Tina began to make progress. "The little changes my registered dietitian suggested — like adding almonds to my mid-afternoon snack of yogurt and fruit — really paid off. He points things out I'd never thought of before. It’s been a real education." And by using MealLogger, both she and her registered dietitian were able to keep track of her eating patterns more easily. "This awesome tool has allowed me to become healthy!" Changes in eating habits allowed her to cut back on her medications. She also lost over 100 pounds during this time.

Impressed by her mother's achievements, Tina's college-age daughter began to use MealLogger as well. "There's so much junk food in the dorm, the app helps her to eat healthy," Tina says. "When she's back from school and has more time, we plan to start a group on the app so we can support each other more." For Tina and her daughter, living healthy has become a habit.

Some of Tina's select meals

Click here for more information about the Meallogger application capabilities